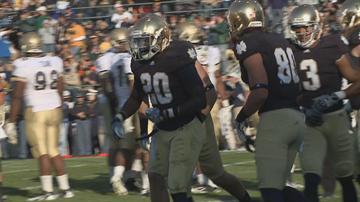 The two will not travel with the team to Ireland.

"Our players are aware of the standards I set for our program and that failure to meet my expectations will result in consequences,” Kelly said. “Justin and Cierre violated our team rules so I’ve suspended them for the first two games of the season.”

Rees and Calabrese were suspended after they were arrested in May at an off campus party.

Utupo played in 12 games in 2011, primarily on special teams.

The Irish face Navy in Ireland next Saturday.