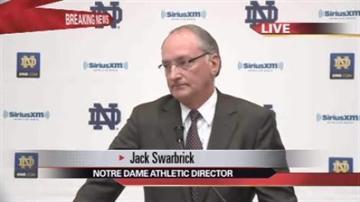 SOUTH BEND, Ind. -- One of the most heartbreaking stories this college football season involving Notre Dame’s Manti Te’o was not true. The girl he called his girlfriend. Lennay Kekua, didn't exist - it was an elaborate hoax.

The girlfriend had "died" in September 2012, the same week as Manti's grandmother.

According to Swarbrick, Manti was at the ESPN awards in Orlando when he received a phone call from someone at Lennay's number. The woman on the phone sounded like Lennay and she told Manti that Lennay was not dead.

Manti was unnerved by that, Swarbrick said.

Exact details of the phone call are unclear, but it appears the woman gave Manti and excuse as to why he was told she was dead.

Manti didn't tell anyone about the hoax because he wanted to speak with his parents in person.

Manti told his parents about the scheme while visiting during Christmas, then on December 26, he called his coaches to inform them of what happened.

On the 27th, Swarbrick met with Manti for nearly two hours. During that conversation Manti walked him through the entire relationship from the first time they "met" online, to the phone calls, to every detail of his relationship with the woman he knew as Lennay.

Swarbrick said that Manti was the perfect mark for the scheme because he is so willing to believe in others, and willing to help, that he never suspected anything was wrong.

After the meeting with Swarbrick, a private investigator was hired to look into the hoax to find out who was behind it and what purpose it served. Swarbrick said he was concerned about potential NCAA violations or possible extortion attempts.

Swarbrick received the final report of that investigation in January. Investigators discovered online chatter among the perpetrators and comments they made that showed they were enjoying perpetrating the hoax.

The investigator's report was handed over to Manti and his family. They will be allowed to determine how to proceed with the matter, including whether they want to get law enforcement involved.

Swarbrick got emotional when he spoke of how the perpetrators used Manti.

"The thing I’m the most sad about the single most trusting human being I’ve ever met will never be able to trust the same way again in his life."

Manti was planning on revealing the hoax next week, but the story broke online before that happened.

Swarbrick believes Manti will speak about what happened on Thursday.

Click here to read a transcript of the news conference.