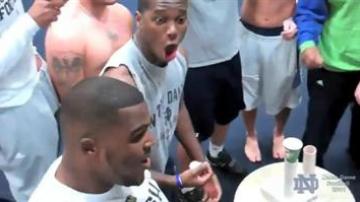 NOTRE DAME, Ind. -- The Fighting Irish started off the season with a losing home opener against the University of South Florida.  The following week, they fell to Michigan.  There was not a lot of hope in the hearts of Notre Dame fans.

But the Irish have made an amazing comeback with four straight wins!  Each week, the team seems to be getting consistently and progressively better!  So what's their secret?  Dedicated players?  Inspirational coaching?  Practice, practice, practice?  That all plays into it, we are sure. After checking out some of their web videos on YouTube, ABC 57 News thinks we now know what's driving the success of the team: Trick Shot Mondays.

Every Monday, away or home, the team gets together in the locker room for a friendly game similar to beer pong, minus the beer.  Ever since they have started this new tradition, the team known for its legacy of traditions has been winning on the gridiron.

Notre Dame has beaten Michigan State, Pittsburgh, Purdue, and most recently, the Air Force!  This week is a "Bye Week," so they don't have a game on the schedule.  But next Saturday, they are facing the University of Southern California.  Will Trick Shot Mondays pull through?  Only time will tell.  In the meantime, the players want to thank "Jesus and Trick Shot Mondays" as the source of their continued success.

Check out these videos!