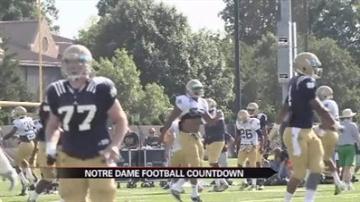 SOUTH BEND, Ind. -- Notre Dame football's home opener is in just two weeks. Some players are still getting used to new positions or leadership roles, but they say they're taking it one practice at a time to make sure they're prepared.

The Fighting Irish are hard at work on the practice field.

The players say they're zoned in for the season opener.

But of course tweaks are still happening for the Irish.

Just Saturday the Irish got news of a shakeup on the roster.

"Danny announced today to the team that he will no longer be playing football," said Head Coach Brian Kelly.

Coach Kelly says outside linebacker Danny Spond has a medical issue, but will stay on the team to coach.

Those filling his spot are happy about.

"I've learned a lot so I'm excited to have him as another coach," said outside linebacker Ben Councell.

Coach Kelly says Councell and freshman Jaylon Smith will get a lot of playing time at the open spot.

And after last season --there's a big vacancy at tight end after Tyler Eifert graduated.

Senior Alex Welch is happy to get off the sideline to fill it after missing all of last season with a knee injury.

"I'm feeling a lot better. I think the spring really helped me get to the point where I am now certainly feel like my old self. Not really thinking about it just excited going out there playing football like I love," said Welch.

"I've been working on a lot of everything pass catching running routes blocking the work is truly never done no matter how well you do," said Koyack.

With just 12 days until the game against Temple, the work continues.