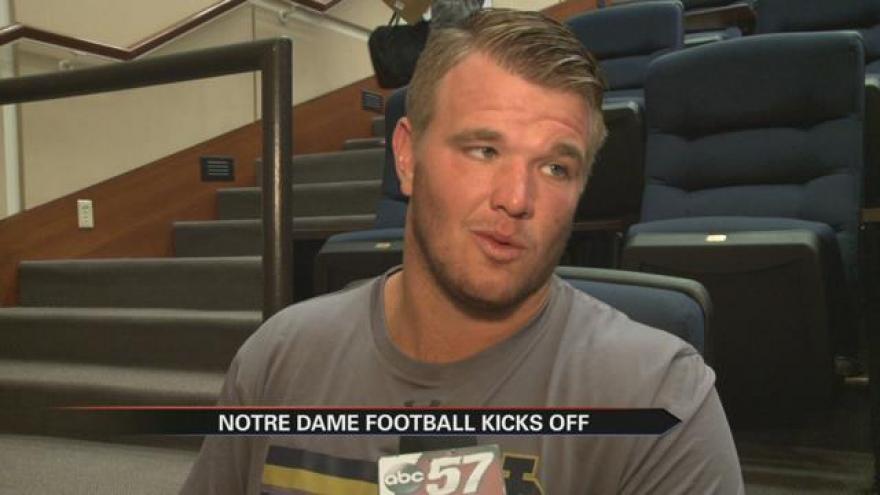 NOTRE DAME, Ind. -- Notre Dame Head Coach Brian Kelly hasn’t named a starting quarterback. The players say as long as the quarterback can get them the ball and lead the team to victory, they trust Coach Kelly to make the right choice when he’s ready.

The two contenders are Malik Zaire and DeShone Kizer.

"The locker room could care less. They know they're both really good so there won't be any controversy. It won't be split or divided. Our guys trust that we'll make the right decision,” said Coach Kelly.

"It doesn't affect us at all. Whoever can get us the ball and throw the ball and run the offense, that should be the one that's playing and it should be that way for any position on the football field,” Torii Hunter, wide receiver, said.

"It says a lot about our team’s character to kind of have that big of a question going into camp but everybody's been working and it doesn't matter who's going to be back there we're all going to try to have the same kind of success that we want,” Mike McGlinchey, offensive lineman, said.

Regardless of who starts, both quarterbacks are taking a leadership role.

"I'm kind of stuck between two hard spots when you're out there trying to lead a young team who needs some experience and talk those guys up while also competing for your own job is kind of a weird deal. I'm kind of excited to see where it takes us, and excited to get out there and compete again,” Kizer said.

"I just think it's a natural thing in terms of leadership and in terms of both of our personalities and the way you know we go about how we see ourselves on the team and our roles for the team. I think you know, we're in two different positions in terms of our age and everything but I think our influence is the same and we keep the same focus in mind and that's about winning games and doing what's necessary for the team,” Zaire said.

While there are plenty of scenarios out there in regards to playing time, Kizer has one goal in mind.

"I plan on being the starter,” Kizer said.

Kizer wasn’t being cocky. He said ultimately the decision comes down to the coaches and he will do his best to earn that position.