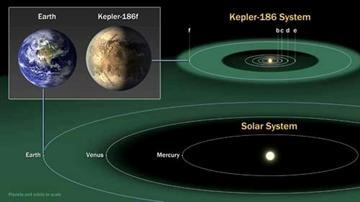 NOTRE DAME, Ind. -- Researchers with NASA have discovered a planet approximately the same size as Earth and its distance from other stars means it could be habitable. One of the researchers at Notre Dame has been working on the project.

The planet is Kepler 186F, discovered by the Kepler space telescope.

The planet is 490 light years away.

"Basically Kepler is telling us that yes indeed that there is a good chance to have life on these planets," said astrophysicist Justin Crepp.

Dr. Crepp is part of the team of scientists who discovered Kepler 186F. It isn't the only one they've found.

"There are actually five planets around this star. They are all very small comparable in size to the Earth and the outermost planet, Kepler 186f is squarely in the habitable zone," said Crepp.

They know the planet's radius and the upper limit of its mass, but they don’t know what it's made of.

"For example we don't know what its atmospheric constituents are. We do suspect strongly that it's a rocky planet which could help be conducive for the development of life," said Crepp.

Crepp says they are working on an instrument that will help them learn more about the composition of this new planet.

"The instrument is a spectrograph that records a very high resolution spectra of the star and it looks for the Doppler shift. If there is a planet orbiting the star, the star will wobble in and out of the sky and you can actually detect that shift in the spectrum and if it's periodic you can infer the existence of the planet," said Crepp.

The I Locator should be finished by 2017.