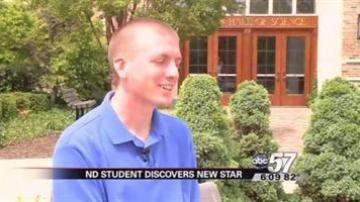 NOTRE DAME, Ind. – First year law student Colin Littlefield spends a lot of his time at the Notre Dame Observatory. For about four years, he’s been volunteering as teaching assistant, but now he’s earned his spot up top. Littlefield discovered a rare Wolf-Rayet star at the observatory.

"It's thrilling because when I signed up to be a peace studies major I had no idea that this is the direction that my research would go in," said Littlefield.

Last November Littlefield was working with a university in Japan to observe variable stars.

"That’s a type of star that varies in its brightness," added Littlefield.

But what was next to that group of stars is what caught his eye.

"I noticed another star nearby that wasn't known to be a variable star," he said.

Littlefield said he observed the star for a total of about 24 hours over the next month, to make sure it "wasn’t a false alarm," he said jokingly.

Littlefield said he expected it was a rare star because it was extremely hot, had a strange composition, and was more massive than the sun.

With help from Notre Dame Physics Professors they got stronger images of the star from larger telescopes in Texas and Arizona.

This confirmed it is in fact a rare Wolf-Rayet star, and has officially been named WR 142b.

And this star really is one in a million, if not billion.

"Wolf-Rayet stars are estimate to constitute only several thousand which may sound like a lot, but it means for every one wolf rayet star you can expect on average at least several hundred million normal stars," said Littlefield.

Littlefield gives a lot of credit to the Notre Dame Physics Department for helping him with his research, even though he isn’t a physics major, and his parents who always encouraged his love of astronomy.

Littlefield said that eventually the star is going to explode because it won’t be able to support itself.

"Its core will get so heavy the star won't be able to support its own weight against the pull of gravity," said Littlefield.

The other co-authors are Peter Garnavich, Terry Rettig and Colin McClelland from the Notre Dame Physics Department, Howie Marion of the Harvard-Smithsonian Center for Astrophysics, Jozsef Vinko of the University of Szeged in Hungary; and J. Craig Wheeler of the University of Texas at Austin.

The final version of it was submitted in early April, and was accepted within a week.

The authors are still waiting on the final proof of their paper to be delivered.

What’s next for the law student who now has star discovery on his resume? Well, he’s turning his attention to his law school finals which start over the weekend.