Notre Dame students "Call In, Write In, Speak Out" to political representatives 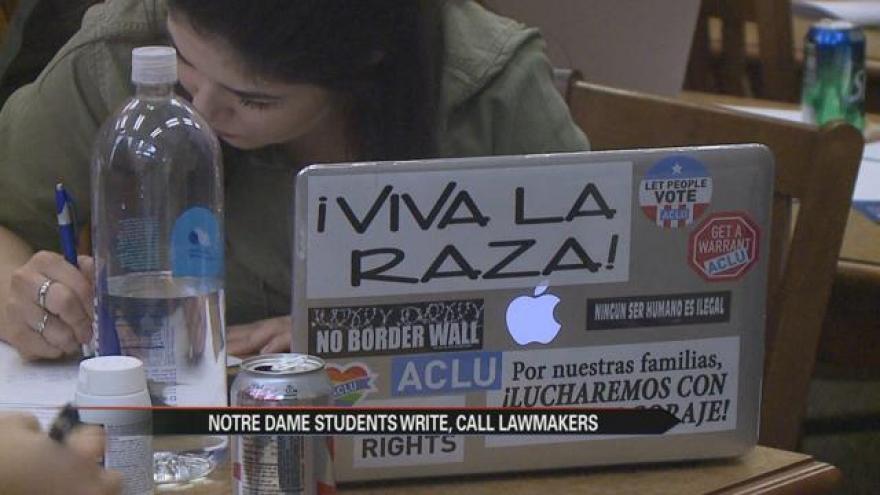 Students at Notre Dame spent their weekend getting politically active with pens, paper and their cell phones as well as the intention of continuing to make their voices heard.

Back in November, ABC57 News showed you protests and demonstrations being held on campus after the results of the 2016 election. Three months and a resolution later, students say they’re taking it a step further.

The Student Coalition for Immigrant Advocacy and the Latino Student Alliance held a workshop event Saturday to voice concerns over everything from local immigration matters to the Dakota Access Pipeline. Call In, Write In, Speak Out was an all-day event where organizers had one goal in mind: speak out directly to as many political figures as possible. Some of these political representatives include a senator in Illinois and Speaker of the House Paul Ryan.

When asked if she participated in the protests and demonstrations being held on campus, Notre Dame Senior, Michelle Mann said she does participate in protests across the Midwest that fit her beliefs and she feels as though it’s her responsibility to stand up for what she believes in, but she says now, it’s time to walk the walk.

“This is really where the real work starts. All the demonstrations and the marches and stuff like that, that’s all great and stuff but it’s about when you actually start to walk the walk. You can oppose something and say that you’re upset about something, but unless you start to do something about it, then you really haven’t gotten anywhere. So that’s where it starts is at events like this today,” said Michelle Mann, a student at Notre Dame.

Mann says speaking directly to these lawmakers is where the real work starts and that it helps to curb some of that fear and uncertainty at a time like this.

“Moments like this when similar minded people are able to come together and say ‘we’re trying to do something to make a better life for ourselves and for other people in our country’, this kind of thing allows us to feel like we have just a little bit more control in our own destiny and have a say in the things that go on in our country, so things like this, moments like this give me hope,” said Mann.