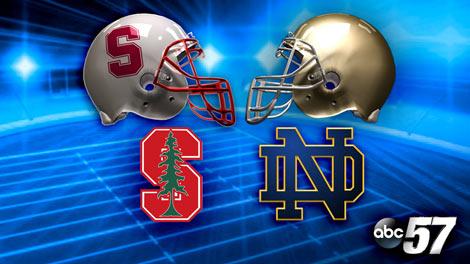 In week 14 of college football, Notre Dame travels to Stanford, California to play the Stanford Cardinal.

The Irish are ranked No.6 after beating Boston College in week 13 while the Cardinal trail behind at No. 9 this week.

The Irish will start with the ball.

Just a few minutes in, Stanford scores the first touchdown of the game putting the Cardinal up 7-0 with 9:29 left in the first quarter.

But the Irish come back with a quick TD to tie it up. C.J. Sanders takes it 93 yards on the kickoff return and the game remains 7-7 in the first.

Stanford with their second touchdown of the game. This will put the Cardinal up 14-7 with 1:54 left in the first quarter.

After several attempts to get the ball down the field, Notre Dame's Justin Yoon's field goal attempt is good. The score is now 14-10, Stanford leading in the 2nd with 12:26 left.

Notre Dame forces a punt so the Irish will have another chance at taking their first lead of the game.

The Irish trail right behind the Stanford Cardinal after their 25-yard field goal attempt is good! Stanford leads 14-13 with 5:02 before the half.

TOUCHDOWN Irish! Kizer to Fuller for the 73-yard touchdown and the Irish now lead 20-14 with just 2:15 left in the first half.

Just seconds later Stanford's Cajuste gets right under the pass to set it up at the 14 yard line of Notre Dame.

But that's not all, seconds after that play Stanford's Michael Rector will score their 3rd touchdown of the game putting them up 21-20 against the Irish with 48 seconds in the first half.

Stanford leads 21-20 against the Irish at the half.

Coming back from the half, the Irish couldn't quite get it into the end zone so they go for a 29-yard field goal attempt and it is good. The score is now 23-21, Notre Dame with 11:03 remaining in the 3rd.

Stanford will just get their 4th touchdown taking it in from the 1 yard line putting the Cardinal up 28-23 against the Irish. 6:58 left in the third.

Touchdown ND! Notre Dame's Josh Adams takes it in putting the Irish up 29-28 in the 3rd quarter.

Five seconds after coming back from the 3rd quarter Stanford's Austin Hooper takes it in for the Cardinal giving them a 35-29 lead against the Irish in the 4th quarter.

Notre Dame with a golden pass, Kizer finds Corey Robinson in the pocket for 21 yards and the Irish have a shot with 3:00 left in the game.

And the Irish score! With just seconds left in this game, Kizer pulls through with a touchdown and the Irish take the lead 36-35 with :30 left in the game.

Stanford gets within a 45-yard field goal range and the attempt is good.

The Cardinal will pull through and beat the Irish with a final score of 38-36, Stanford.