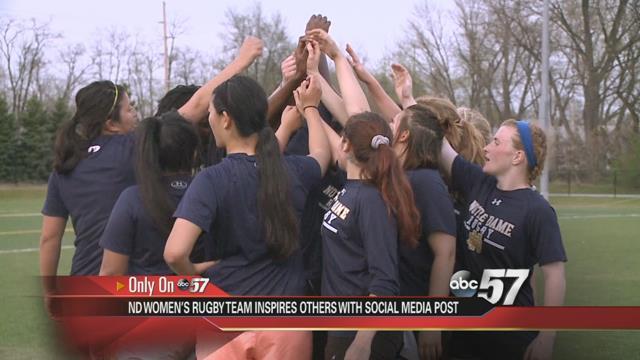 The hash tag “Because of Rugby” is trending on social media and a Facebook post by the Notre Dame Women’s Rugby team is getting attention from all over the world.

“Our hope would be that younger girls would see this and know being athletic is a good thing,” said Sarah Cokington, sophomore Notre Dame Women’s rugby team.  “Being a fighter it’s all important especially in the culture we’ve grown up in being told to be princesses being told to be perfect, we aren’t perfect and that’s what makes us who we are.”

These athletes say rugby has done much more for them then they could have ever imagined.

“It is more than just a sport to me,” Cokington said.  “I think that through everyone’s quote through what rugby means to us we can really communicate that this is a family , it’s a community, it’s helping us grow as people and as players and as students and as leaders making us into the best person we can be.”

The “Because of Rugby” hash tag was initially started at Emory University in Atlanta back in 2014.

Last week the Fighting Irish joined in.  Each player posted a quote of what rugby has done for them.

“The statement I finally settled on was ‘because of rugby I know I am not too small to make a big impact’,” said Alexandra Buccilli, Senior Notre Dame Women’s Rugby team.  “I am one of the small girls on the field but because of rugby there are 15 different positions, different shapes and sizes and I am the perfect size for my position.”

Those inspiring quotes reached people from Ohio to Hong Kong.

The Fighting Irish never thought their post would garner such attention.

“I don’t think any of us realized how big it was going to become,” said Buccilli.  “My favorite part is having the dads and moms comment on our page saying that their daughters six years old, nine years old want to start playing rugby or that they already are playing rugby now.”

In a game where winning is everything, these women prove that if you put your teammates, your family first, the W’s will come.

Click here to check out the team's photos and what inspires them.