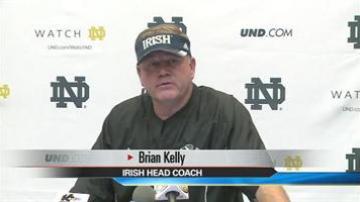 WEST LAFAYETTE, Ind. -- The Irish will take on another Big Ten opponent Saturday night, the Purdue Boilermakers, and Head Coach Brian Kelly's expectations are high after the work his team has put in at practice this week.

"They needed to get back out there and really focus on their craft, and they did and my expectations are that they'll play better football on Saturday for it," said Coach Kelly.

By putting the past behind them and looking forward, players say they're feeling good about Saturday's matchup.

"We've had a positive attitude this week. We've really tried to bounce back, we've tried to focus on doing the best we can to prepare this week and kind of learning and forgetting about last week," said TJ Jones, Irish wide receiver.

They hope taking the time to focus on the fundamentals and to concentrate on executing plays will allow them to come out on top this week.

Purdue's new head coach Darrell Hazell will be looking to get his first win against Notre Dame.

So far Coach Kelly has never lost against the Boilermakers.

He says that's even more reason there's no room for mistakes.

"I need all 22 guys to play the game right way all the time, and there were times where we didn't as a group so I'll be looking for that and we're demanding that from them," said Kelly.

Both the Boilermakers and the Irish come into this game with one win and one loss on the season.

A win for the Irish will make for a six game winning streak against Purdue-including three straight wins at West Lafayette.