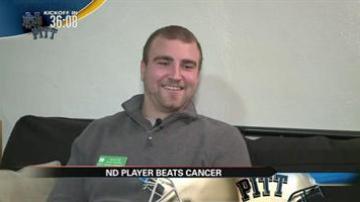 PITTSBURGH, Pa. -- Playing football for the University of Notre Dame is no easy feat and there's one player that has overcome the impossible in his journey to play for the Irish.

Arturo Martinez, 21, from Miami is a senior defensive end for the Fighting Irish.

His story is one that begins long before he set foot on Notre Dame's campus.

Martinez is a senior accounting major at Notre Dame.

He works as an R.A. in Alumni Hall to help pay for school and when he's not hitting the books for his next quiz or exam, he's on the practice field with the Fighting Irish football team as a defensive end.

Sounds like your typical college athlete right? Well, Martinez says it hasn't always been so easy.

"It hasn't always been sunshine and rainbows like Rocky says," said Martinez.

Seven years ago, Martinez was 14-years-old and a high school freshman cross country runner and basketball player. After having a mass the size of a golf ball on the left side of his face for several years, his biology teacher urged him to get it looked at by a doctor.

"One of the first days of class, right when she met me, she said what's that thing? You should go get it checked out," said Martinez.

A week later Martinez and his family got the bad news.

"You have been diagnosed with lymphoma, which is a type of cancer. So I hear this word cancer, I had no idea what he was saying before lymphoma, but I hear cancer, and he says it's level four out of four, it's been in your system for a while now. We're going to have start chemo immediately next week," said Martinez.

Martinez had just one surprising question for his doctor.

"I tried to be tough so the only question that I asked was when can I play basketball again? Will this affect my basketball career?" said Martinez.

Martinez not only played basketball that year, he also earned a 4.5 GPA while undergoing seven months of chemotherapy and radiation treatments.

The hardest part for Martinez was staying strong for his family.

"Cancer didn't stop for holidays because we were trying to enjoy it with the family, and I remember feeling real, real sick and real weak Christmas Eve and trying my best to tough it out," said Martinez. "It was a really sad day for me because I felt like I was bringing down the rest of my family."

He kept battling-and learned in February he had won his fight with Hodgkin's lymphoma.

By his senior year of high school, Martinez was finally feeling strong and healthy enough to take up the game of football-playing for Belen Jesuit as a tight end.

Shortly after he became a freshman accounting major at the University of Notre Dame.

"On football weekends, I mean this place gets so, it's just such a special experience," said Martinez.

He attended the first home game that season against Purdue.

"I don't really like this whole sitting and watching thing, it's not for me," said Martinez. "I went to that game and I left thinking I'm not coming back to this stadium unless it's in pads."

Martinez began working with a strength and conditioning coach bound and determined to make the team.

"I am physically capable to work out and run and do whatever is necessary to get on that team. Why don't I just do it?" said Martinez. "It was just an opportunity that was there to make a difference and leave a mark here."

Yet again, Martinez embarked on a difficult journey.

He earned a chance to try out early that spring but was cut.

He didn't give up. He kept training.

In May, Martinez was called back and told he'd finally made the team and would join the Fighting Irish that fall at camp.

Again, he had just one question.

"Do we need to bring our own cleats, or how does that work? And once he said, 'Oh no. Everything is provided shorts, shirts, cleats, all you need is a good attitude.' And I was like I did it," said Martinez.

Martinez has played with the Irish for four years now and he says the experience has taught him so much.

"Any sport teaches you a lot, especially football here. The whole process of trying out and also being on the team. It's had its ups and downs with me, I've learned a lot of life lessons, very valuable, a lot of intangible, I wouldn't be able to learn in books," said Martinez.

He hopes his story can inspire and remind others not to take the simple things for granted.

"Anybody that is healthy has everything they need in life," said Martinez.

Martinez says he hopes to return to the University of Notre Dame this fall to pursue his master's degree in accounting.

He says he just got the news this week that the Ernst and Young Scholar's Program awarded him a full ride scholarship.