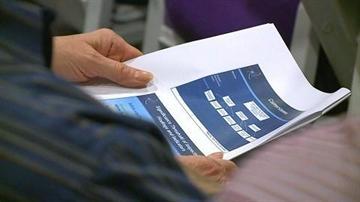 SOUTH HAVEN, Mich. – The United States Nuclear Regulatory Commission (NRC) met with dozens of concerned community members and employees of the plant to answer questions over several violations that occurred in 2011.

Many community members wanted to know if the plant was safe to live around. The NRC assured them, it was. “We have multiply layers of protection. We don’t rely on only one piece of equipment to perform a safety function. Our rules require these multiple barriers if you will,” said Cynthia Pederson, the Region 3 Administrator for the commission.

Pederson, who once was an onsite inspector at the Palisades plant, explained how the commission and their inspectors take every violation seriously, no matter how big or small.

Significant violations call for intervention by the commission to ensure the company running the plant identifies and permanently fixes a problem after it comes up.

Unlike other industries where a minor problem one-time-mistake could be easily overlooked, the NRC will err on the side of caution and conduct an investigation into the matter.

Case in point, a plant employee applied grease to a part on a water pump that helps cool the reactor. The mistake caused the part to not work properly, and ultimately the pump failed an inspection because of it.

While this posed no danger to the plant or public, due to several redundant back-up pumps which were operating properly, the potential that it could have been worse had those same pumps not been working caused the NRC to flag the incident as a violation.

Another violation came when an employee did not follow procedure when working on an electrical panel. The employee caused a short to occur which set off a chain reaction that forced the entire plant to shut down.

Again, there was no immediate danger, and the complications the short created were easily handled. Still, NRC inspectors say it never should have happened to begin with.

Inspectors hope, if there is anything the public takes away from the meeting it is the understanding that the NRC has a zero tolerance for mistakes and extremely high expectations for all of the staff at the nuclear plants.

The NRC inspectors are on call 24 hours a day, 7 days a week, 365 days a year; and they live near the plant they work out of. As does their families; so they have a vested interest that every nut and bolt in that building is accounted for, that every system is working properly, and every employee is doing their job by the book, every time, without exception.

Due to the number of violations the plant racked up in 2011, some are questioning if the “safety culture” at the plant needs to be looked at.

The NRC thinks that is a fair question and promised to look into it this year.

Meanwhile the company operating the plant, Entergy, has already begun additional workforce training, to address this issue, according to Mark Savage, Communications Manager for Entergy.

But those are just empty words to Pederson. She wants to see results not predictions. “We will be watching performance, not promises,” said Pederson.