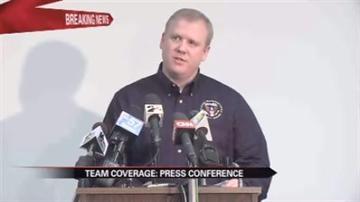 Todd Fox of the NTSB restated the facts of the case, including the fact that four people were on board, two were killed and two were injured. One person on the ground was also injured.

Fox said he would be in South Bend for the next three to four days to investigate the crash.

First his focus will be on the recovery of the wreckage to a secure location at the South Bend Regional Airport.

Fox said they had recovered the cockpit voice recorder, also known as the black box, and it was sent to Washington DC. There the information will be downloaded for the investigation.

Information concerning what is on the voice recorder will be released when the final report is issued between nine months and one year from now.

Fox said his job is not only to determine the cause of the crash, but to determine if there are any safety issues that contributed to the crash so they can make safety recommendations to prevent this type of accident from happening again.

When asked, he said he was unaware of any safety issues regarding the type of aircraft involved in the accident.

Fox said that although they are still collecting information, the preliminary investigation revealed the aircraft made two approaches to the South Bend Regional Airport to land followed by a “go around” or an aborted landing.

Shortly after the aborted landing, the plane crashed.

Both pilots had pilot certificates and multi engine aircraft certification, but further details about the pilots’ experience will be gathered from the FAA.

On Monday, Fox says the main fuselage was separated from the house and on Tuesday, a crane and flatbed trailer will be used to transport the wreckage to the secure location at the South Bend airport by the close of business Tuesday.

Fox added they are continuing to investigate why the plane’s passengers were headed to South Bend.