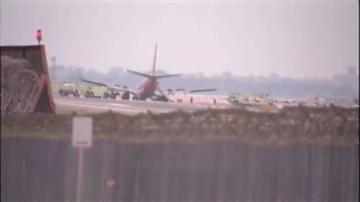 Flights across the country were delayed or canceled following the crash.

Federal investigators are looking into what went wrong on that Southwest flight after its hard landing that forced  everyone to evacuate the plane.

The nose gear collapsed and caused sparks and even flames.

Inside the plane, passengers began panicking and even reported seeing smoke inside the cabin.

Nearly a dozen people were rushed to the hospital. All are expected to be okay.