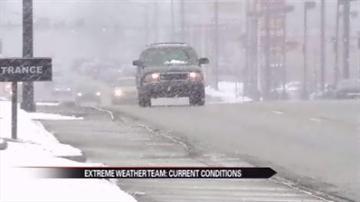 Around an inch of snow fell in Mishawaka overnight.

Tim Ryan, Assistant Street Commissioner for the city of Mishawaka, says storms like this are nuisance storms.

"We were expecting snow,” said Ryan. “But it was more than I anticipated."

Cleaning up after a nuisance storm can be difficult because often the snow is too much for salt alone and not enough for plows to use their blades.

But by mid afternoon Ryan had seen enough to call off his crews.

"We are going to go ahead and shut down operations; I've been through the city twice today, checked on the streets to see where we are at; we are in very good shape right now,” said Ryan.

He says his crews have a bigger issue to deal with – fixing potholes.

"We'll start addressing those and we'll keep an eye on the roads and if the snow starts collecting, we'll just switch back to the snow removal operations and go from there,” said Ryan.

As long as the weather cooperates, things will go smoothly

But Ryan isn't holding his breath. He says even if the snow does stop, people should continue to drive carefully.

"It's not driving 40 mile an hour weather, you know. Just be careful; watch your speeds, be aware of your surroundings and get home safely,” said Ryan.

Ryan says as the temperature drops you should watch out for ice build up on side streets and in cul-de-sacs.

He says the main thoroughfares should be fine as long as they stay relatively dry.