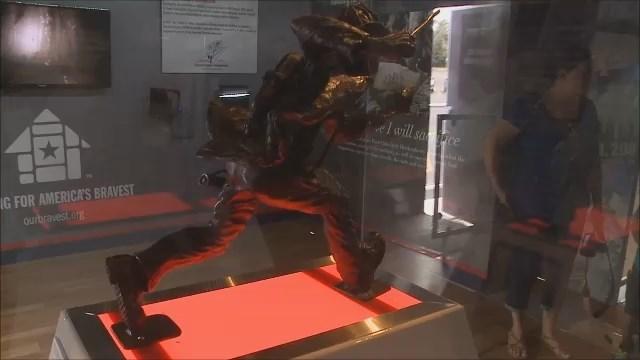 Never forget... That’s the message behind the 9/11 memorial exhibit visiting Michiana. Several New York City firefighters are here to share their memories and tell us why we should never forget.

"This traveling tribute brings the reality of  the events of September 11th, 2001 to the people of La Porte County and allows us to remember and perhaps better appreciate the gravity of the events,” said one La Porte County Sheriff who spoke during the ceremony.

A giant 9/11 memorial exhibit opened up in Michigan City on Wednesday.

"For those that lived through September 11th, 2001 and witnessed those events as they transpired, let this memorial be one of remembrance and allow us never to forget,” said another first responder who spoke.

Along with a ceremony, several New York City firefighters were there to talk with Michiana residents about what happened during 9/11.

One firefighter I spoke with remembers the call like it was yesterday.

“It was a long day. I saw the first plane hit at 8:46 a.m. We were just starting to get going. It was like every other day not a cloud in the sky and we were just stunned at first. Soon as the second tower was hit and I turned around I saw we were heading to the Trade Center, north tower and we just got in the rig, I was driving that day and we got down to the Brooklyn-Battery Tunnel in about, what usually takes by car about a 50-60 minute ride, took me about 11-12 minutes to get there,” said Randy Lotz, a firefighter in New York.

But he also remembers the aftermath and says the exhibit is in honor of those he knew.

"At 11:30 that night on September 11th, I ran into a friend of mine that I work with and he told me that none of the guys from ladder 101 made it... And this is where it hits me. I knew everyone of 'em. Really good friends of mine and that's why am here today. Because those guys they can't say what happened so I'm here to do that,” said Lotz.

The exhibit at the Blue Chip Casino parking lot in Michigan city from noon to 7:00 p.m. (CDT) until September 5th and It's free and open to the public.