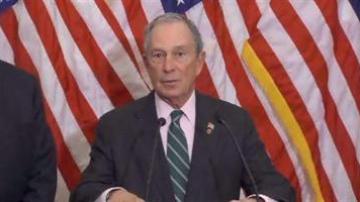 The focus in Washington is now centered firmly on negotiations to avoid the upcoming fiscal cliff, but New York City Mayor Michael Bloomberg wants to make sure lawmakers have not forgotten about another crisis.

He said New York State alone, needs about $42 billion to recover from Superstorm Sandy and the mayor said this is not the time to play partisan politics.

"Hurricane recovery is not a partisan issue and in New York, we have a united front of Democrats and Republicans and now we have to bring together both sides in Washington on both sides of Pennsylvania Avenue," said Bloomberg.

Bloomberg said he's pressing White House officials for as much money as possible, as soon as possible.

Christie said more than 30,000 homes and businesses were badly damaged or destroyed from last month's storm.