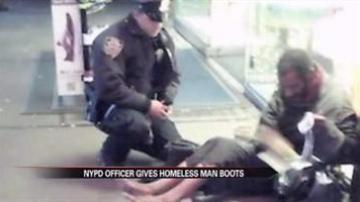 NEW YORK -- A New York Police Department officer's actions has caught the attention of the world.

Just a few weeks ago, Officer Lawrence DePrimo was just another cop on the beat.

But an act of kindness caught on camera was everyone talking.

DePrimo gave a homeless man a pair of boots on a frigid night in Times Square.

That act was captured on camera by tourists who sent the photo to the NYPD. From there, the photo went viral.

DePrimo said that in a way, the shoeless man changed his life.

"He was extremely thankful. He had a smile from ear to ear which is something I'll never forget," DePrimo said. "And he said thank you officer. He's like god bless you and be safe out there. He kept on going his way. I asked him if he wanted to get a cup of coffee and food but he didn't want to and he just kept on going."

The officer said he carries the receipt from the boots inside his bullet-proof vest as a reminder of those who are less fortunate.