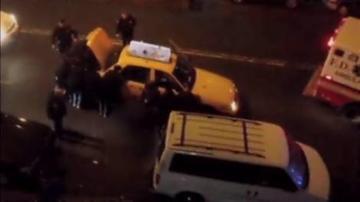 NEW YORK CITY -- New York Police Officers are known to be the strongest of the strong but new video out of the Bronx shows how true that is.

An eyewitness says a man suddenly ran into the street and was struck by a cab.

The man was pinned underneath the cab and NYPD officers lifted the cab off of him.

Witnesses say the heroic attempt brought them to tears.

The victim is recovering in the hospital Saturday night.