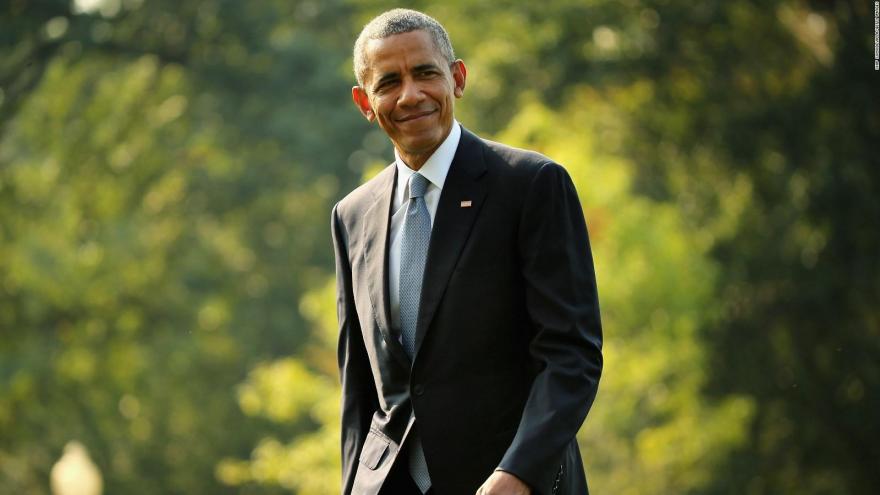 WASHINGTON (CNN) -- President Barack Obama will leave office Friday with his highest approval rating since 2009, his presidency largely viewed as a success, and a majority saying they will miss him when he is gone.

A new CNN/ORC poll finds Obama's approval rating stands at 60%, his best mark since June of his first year in office. Compared with other outgoing presidents, Obama lands near the top of the list, outranked only by Bill Clinton's 66% in January 2001 and Ronald Reagan's 64% in January 1989. About two-thirds (65%) say Obama's presidency was a success, including about half (49%) who say that was due to Obama's personal strengths rather than circumstances outside his control.

Amid those glowing reviews, one-quarter of Americans (25%) say Obama is one of the nation's greatest presidents, far outpacing the share who felt that way about other recent presidents as their terms ended (11% described Reagan that way, 10% Clinton, and 5% or fewer said so about either President Bush). Still, nearly as many (23%) call Obama a poor president, more than said so about Reagan, Clinton or the first president Bush, but well below the 46% who said George W. Bush was a poor president as he prepared to leave the White House.

That assessment of Obama's presidency, as well as his approval ratings, are marked by sharp partisan divides. While 54% of Democrats consider Obama one of the greatest presidents, 54% of Republicans call him a poor president. Though he has earned near universal approval among Democrats (95% approve), just 18% of Republicans say they approve of how he handled the presidency. That gap explains the difference between Obama's approval rating and those of the two former presidents who left office with higher marks.

Both Reagan and Clinton held approval ratings above 9-in-10 among their own partisans, yet their approval ratings among those in the opposing party outpaced Obama's, with 39% of Republicans saying they approved of Clinton at the end of his term and 38% of Democrats approving of Reagan as he prepared to leave office.

Looking back at the critical issues of the Obama years, Americans give the President positive ratings for handling several issues that were central to his first run for office: the economy, foreign affairs and race relations among them.

Obama took office several months after a massive stock market crash and amid a crisis in the nation's housing market, and at a time when international impressions of the United States were at a low point, according to polls. At the time of his inauguration, 72% expected there to be at least some improvement in race relations following his election as the first black president.

In the new poll, Obama also scores net-positive approval ratings for his work on education, policies toward gays and lesbians, environmental policy and climate change, all areas where policies shifted sharply during Obama's tenure.

Majorities disapprove, however, of Obama's work on gun policy, an issue he embraced following the death of 20 children and six adults in a shooting in Newtown, Connecticut, and his handling of ISIS, which rose to prominence during his time in office. And the public is mixed on his handling of two top domestic issues -- illegal immigration and health care policy -- and two national security concerns -- terrorism and cybersecurity.

All told, Obama's time comes to an end with 50% saying things in the country are generally going well, 50% that they're going poorly. That's a sharp increase compared with the start of Obama's time in office. In early 2009, in the midst of an economic crisis, just 21% said things in the country were heading the right way, that rose to 49% by the time of Obama's second inauguration, and peaked at 54% just before last year's election.

Similarly, there's been a sharp turnaround in impressions of the economy under Obama. Now, 57% say economic conditions are good, compared with 13% in January 2009. Much of that improvement in opinions on the economy came during Obama's second term. In December, 2012, just after his re-election, that figure had risen to just 26%.

Looking ahead, the public is split on whether the country will be better (47%) or worse off (48%) four years from now, but they are more apt to see improvement on the horizon for the economy, 62% say that will be better a year from today. Asked about their own financial situation, 40% expect it to improve in the next year, 48% say it'll be the same and 11% that it'll get worse in the first year of Trump's presidency.

The CNN/ORC Poll was conducted by telephone January 12-15 among a random national sample of 1,000 adults. Results for the full sample have a margin of sampling error of plus or minus three percentage points; it is higher for subgroups.