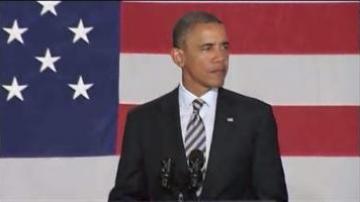 CHARLOTTE, N.C. -- President Obama officially accepted his party's nomination and during his speech he encouraged voters to keep fighting for change.

He told the delegates he and Mitt Romney have two different visions for the future and it'll take time to clear the challenges which he said were decades in the making.

“I'm asking you to rally around a set of goals for your country, goals in manufacturing, energy, education, national security, and the deficit; real, achievable plans that will lead to new jobs, more opportunity, and rebuild this economy on a stronger foundation,” he said at the convention. “That's what we can do in the next four years.”

Both president Obama and V. P. Joe Biden along with their wives are hitting the campaign trail. They’re headed to New Hampshire, and Iowa.

The Republican contenders are working hard to win over undecided voters. GOP vice presidential nominee Paul Ryan held a rally in Colorado Thursday, a key swing state and he did not have kind words for the Obama Administration.

"When you take a look at what the president said back four years ago, remember he said we're not red states, blue states we're the United States of America,” said Ryan. “Let’s set aside childish things and work together. This is the third president I’ve worked with. This is the most partisan president, the most acrimonious climate, the bitterest, partisan environment I’ve ever seen."

Congressman Ryan is headed to Los Angeles for more campaigning.