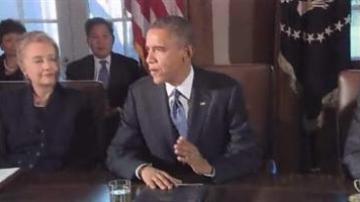 President Obama continues to push Republicans to compromise on a deal to avoid the fiscal cliff.

That's when automatic spending cuts and tax hikes take affect at the beginning of next year. The president sat down for a White House interview to discuss the stalemate.

"Republicans in the House are resistant to the idea of the wealthiest Americans paying higher tax rates and I understand they have a philosophical objection, on the other hand, we're willing to make some really tough decisions about spending cuts."

Republicans said they don't want to raise taxes on any Americans. The two parties have less than three weeks to negotiate a debt-reduction deal before the fiscal cliff hits.