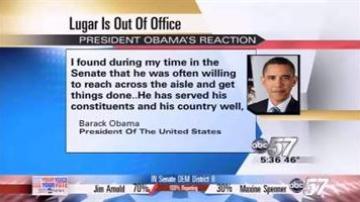 Immediately after the race was called, President Obama issued a statement.

He recognized Lugar for his years of service.

In a statement he said:

"As a friend and former colleague, I want to express my deep appreciation for Dick Lugar’s distinguished service in the United States Senate. While Dick and I didn't always agree on everything, I found during my time in the Senate that he was often willing to reach across the aisle and get things done. He has served his constituents and his country well and I wish him all the best in his future endeavors.”