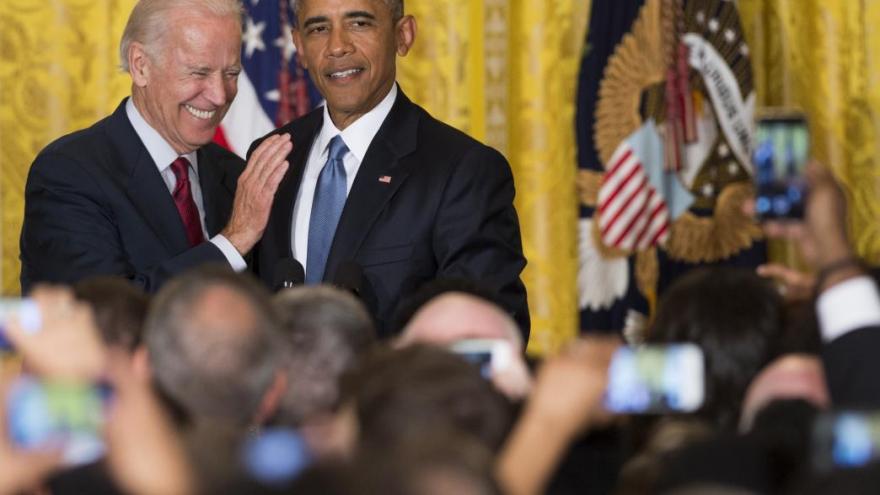 (CNN) -- Former President Barack Obama offered his formal endorsement of Joe Biden on Tuesday, injecting himself squarely in the presidential race for the first time by urging Democrats across the party's ideological spectrum to rally behind Biden and form a unified front to defeat President Donald Trump and win back the White House.

Obama, in a lengthy video taped on Monday and posted on Tuesday, lauds Biden's character and resilience, touting him as the right kind of candidate to lead the country through a crisis like the ongoing coronavirus pandemic. Obama also highlights the stakes of the 2020 election by arguing Trump and Republicans in the Senate are solely interested in power, not making progress for Americans.

"If there's one thing we've learned as a country from moments of great crisis, it's that the spirit of looking out for one another can't be restricted to our homes, or our workplaces, or our neighborhoods, or our houses of worship," Obama says in the over 11-minute endorsement video. "It also has to be reflected in our national government."

He continues: "The kind of leadership that's guided by knowledge and experience, honesty and humility, empathy and grace -- that kind of leadership doesn't just belong in our state capitols and mayors offices. It belongs in the White House."

"And that's why I'm so proud to endorse Joe Biden for President of the United States," he adds.

The endorsement reunites the former running mates and positions Obama, whose endorsement of Biden was seen as a forgone conclusion once Vermont Sen. Bernie Sanders dropped out of the race last week, to be one of Biden's most powerful surrogates in the race against Trump.

It also marks the public re-emergence of Obama into the political arena. The former president kept a low public profile throughout much of the Democratic nomination fight, but he was active behind the scenes.

Biden thanked Obama for the endorsement on Tuesday shortly after the video posted.

"Barack — This endorsement means the world to Jill and me," he wrote. "We're going to build on the progress we made together, and there's no one I'd rather have standing by my side."

Two people familiar with Obama's video say it is intended as more than a simple endorsement of his friend and former vice president. His message is designed to address this particular moment in America and around the world, particularly in the wake of the coronavirus pandemic.

Obama also spoke directly to progressives, praising the spirit of their movement before outlining why he believes they should embrace Biden's candidacy. The former president also offered full-throated praise of Sanders and noted what his candidacy has meant for the pursuit of liberal ideals.

"Bernie's an American original -- a man who has devoted his life to giving voice to working people's hopes, dreams, and frustrations. He and I haven't always agreed on everything, but we've always shared a conviction that we have to make America a fairer, more just, more equitable society," Obama says.

The former president also offered some of his most direct criticism yet of his successor without calling Trump out by name.

"One thing everybody has learned by now is that the Republicans occupying the White House and running the US Senate are not interested in progress," Obama says. "They're interested in power."

Obama casts Trump as a leader who is more interested in helping the wealthy in the midst of a pandemic than average Americans. He argues that the President and Senate Republicans have repeatedly "disregarded American principles of rule of law, and voting rights, and transparency," and have been helped by "a propaganda network with little regard for the truth," seemingly a knock against Fox News.

While those comments are meant to rally loyal Biden supporters against Republicans, they are also aimed squarely at some liberal Democrats skeptical of the former vice president by clearly highlighting the stakes of the election. Many Democrats who ran for president made this argument throughout the campaign, but top Democrats believe it could be more powerful coming from someone who had previously handled the decisions before Trump right now.

Obama in November said he had spoken to all of the candidates during the campaign, often giving them advice both before they announced their bid and after they dropped out. Advisers to the former president said his advice was often the same: Consider why you believe you should be president, what impact it will have on your family and whether you can actually win.

"We have a field of very accomplished, very serious and passionate and smart people who have a history of public service," Obama said at a private fundraiser in late 2019. "Whoever emerges from the primary process, I will work my tail off to make sure they are the next president."

Obama had long said he would get behind the eventual nominee, but the former president's deep affection for Biden was well known to all those who ran against the former vice president this year. Biden even jokingly posted an homage to Obama on "Best Friends Day" in 2019, featuring a friendship bracelet that featured the names "Joe" and "Barack".

That relationship, though, did not keep Obama from giving counsel to other candidates.

As Sanders worked to determine the future of his campaign, Obama and the Vermont senator spoke multiple times, a source familiar with the conversation told CNN. Sanders endorsed Biden on Monday in a livestream, pledging to help him defeat President Trump.

"We need you in the White House. I will do all that I can to see that that happens, Joe," Sanders said to Biden.

In the few moments where Obama did speak out about the race, the former president warned voters of worrying too much about the bruising nature of a primary, reminding them that he and then-Sen. Hillary Clinton had a tough primary in 2008.

And the former president told the candidates to avoid going so far left that they go beyond where voters actually are.

"My one cautionary note is I think it is very important for all the candidates who are running at every level to pay some attention to where voters actually are," Obama said in November, specifically saying he doesn't think candidates should be "deluded into thinking that the resistance to certain approaches to things is simply because voters haven't heard a bold enough proposal."

It is this period of the campaign, however, when some supporters of other candidates, especially Sanders backers, feel like their hopes were dashed once their candidates dropped out, where Obama's team believes the former president can be most useful.

"He is uniquely positioned to galvanize the party around the nominee and increase voter turnout so that a Democrat is successful in the general election," Valerie Jarrett, a longtime Obama adviser, told CNN in March.

Jarrett said that they believed it was "important" to let all the candidates "stand on their own two feet" but that once a nominee was selected, Obama would use the support he enjoyed from a "a broad spectrum of the Democratic Party, both the progressive and moderate wings" to bring the factions together.

Obama's popularity inside the Democratic Party was clear throughout the presidential campaign. A number of candidates ran ads featuring either images of Obama or the former president's voice, including Sanders, who had in the past been critical of Obama.

But the extent with which Obama can reach out to Sanders' supports is questionable, given many of the liberal leader's most vocal proponents see the former president as someone who squandered the movement he built in 2008. Even former Obama aides question how successful he will be in reaching Sanders' more diehard proponents.

Biden was not shy about his admiration for Obama throughout the 2020 campaign. Biden often described himself as an "Obama-Biden" Democrat and, in speeches across the country, would calmly refer to the former President as "Barack," sometimes before correcting himself and calling him the president.

The former vice president even used part of his first major rally as a presidential candidate in 2019 to laud his former boss as "an extraordinary man."

"I watched up close, his character, his courage, his vision," Biden said. "He was a president our children could, and did, look up to. ... He was a great president."

Obama offered similar praise on Tuesday, calling Biden a "friend" and describing the decision to pick Biden as his vice president as "one of the best decisions I ever made."

"He became a close friend," Obama said. "And I believe Joe has all the qualities we need in a President right now."

This story has been updated to reflect Obama's endorsement.