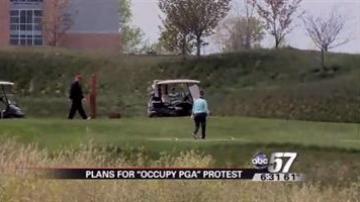 BENTON HARBOR, Mich. -- With the P.G.A. tournament in Benton Harbor less than a month away the occupy P.G.A. protesters are hashing out the details of their planned "peaceful demonstration as they call it.

The protest is over public Act 4, the state bill that took the power from elected officials and into the hands of emergency city manager, Joe Harris.

Petitioners against the state bill got 260,000 signatures to let the people of Benton harbor decide on the voting ballot whether they want an emergency manager. But on Thursday signatures from petitions were made null and void, when two republicans denied them.

Reverend Pinkney says they will be marching from City Hall to here at Jean Klock Beach Park holding a casket with the residents of Benton Harbor's, Whirlpool's, Harbor Shores, and the PGA’s logos on it to symbolize the death of Benton Harbor as a city.

"It's time for them to either put up or shut up," said Reverend Edward Pinkney.

That's the message Reverend Edward Pinkney has for the PGA, Whirlpool, and Harbor Shores.

He says he is tired of them promising money, jobs and democracy to the people of Benton Harbor and never following up on it. That's why he's helping organize the occupy PGA protest.

"On Saturday, I expect there to be thousands of people," said Pinkney.

The demonstration is to protest Benton Harbor's emergency manager.

"Benton Harbor does not have democracy..we have a government appointed official that does not answer to the people," said Pinkney.

As well as get a better cut of the income from the PGA for the financially distressed city.

"They promise to give the tax money to the residents of Benton Harbor rather than give a percentage of the gross of the amount of money. I would prefer the gross amount of money plus the taxes," said Pinkney.

"We all know that Benton Harbor is at least five million in the red so that would balance the books," said Pinkney.

While he is happy the PGA is coming to Benton Harbor, Pinkney and the Occupy PGA protesters just want to make sure residents of Benton Harbor reap the benefits.