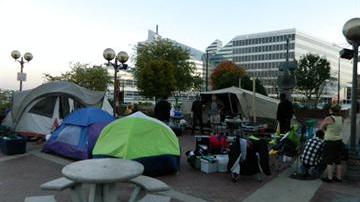 SOUTH BEND, Ind. - Members of Occupy South Bend held and emergency meeting Sunday at 3 p.m. to discuss ending the protest downtown South Bend and moving it to a more central location, according to a source within the movement.

Members voted and decided to continue the protest downtown near the Morris Performing Arts Center.

According to a source there was discussion about ending the protest downtown and joining forces with other Occupy movements across the area and become one occupy that would be called, "Occupy Michiana."

Towns under consideration for the "Occupy Michiana" protest were Niles and Mishawaka.

Occupy South Bend started October 8th with about 100 members. Since then they have been occupying downtown 24/7 with on and off numbers in support. The numbers have dropped considerably now that the weather is turning colder, on average they have less than 10 people protesting.

The group voted to occupy in 12 hour shifts to continue the 24/7 movement.