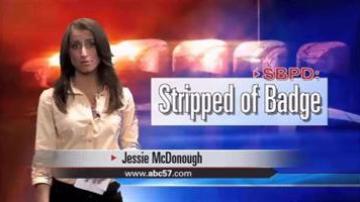 SOUTH BEND, Ind. --  A South Bend police officer was stripped of his badge for possibly interfering with an investigation.

That investigation involves three other officers harassing a 7-Eleven clerk.

"They did a cinnamon challenge," said 7-Eleven Clerk Johnathan Ferguson.

Ferguson said three South Bend Police officers forced him to eat a large amount of cinnamon.  He vomited. They allegedly  videotaped it and put it on YouTube.

"I swallowed it and I was throwing up for three, four hours straight and they were straight laughing the whole time," said Ferguson.

Ferguson made a complaint against the three South Bend officers for taunting him, so now the South Bend Police Department is currently doing an internal investigation.

"I know that this investigation is underway however it is internal and it is nothing that I am kept up to speed with until it is finished," said Ferguson.

Robert went to Ferguson's work on Miami Street to ask other employees there if it really happened.

Then later in the day, Robert was stripped of his gun, badge, and squad car for allegedly interfering with an internal investigation.

Robert said he never knew there was an internal investigation.

According to Trent, being that the investigation has been ongoing, he believes Robert would have known about it.

Robert has hired an attorney and plans on suing the police department if he does not get his job back.