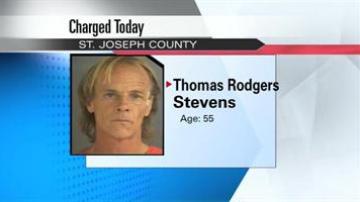 Stevens is charged with:

Possession of a legend drug (felony)

Failure to use headlights between sunset and sunrise (infraction)

In March, South Bend Police Officer Aaron Knepper attempted to pull over a vehicle that was driving slowly down a residential street with its lights off and failed to stop completely at a stop sign.

The driver, later identified as Thomas Stevens, didn't pull over after Officer Knepper turned on his overhead lights.

After about a half block, Stevens got out of his vehicle, but the officer ordered him to get back into his vehicle.

Stevens refused to comply with the officer's commands and then ran towards a residence, which was later identified as his own residence.

As Stevens ran, Knepper tried to use his taser to stop Stevens, but that failed, according to the prosecutor's office.

Knepper then attempted to physically arrest Stevens and the two struggled against the house.

At this time, Suzanne Stevens, 76, got out of the house and grabbed the officer, reports said.

While fighting off Thomas Stevens' mother, Thomas ran in the house, reports said.

The officer grabbed Thomas in the house and then Suzanne grabbed Knepper. Knepper then pushed Suzanne off him a second time, according to reports.

During this incident, all three were injured.

The prosecutor's office says there will be no other charges because Thomas' injuries were consistent with a fall onto a hard, rough surface, which occurred as he was resisting Knepper.