Officer says he's being wrongly accused of a crime 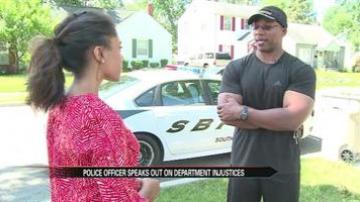 SOUTH BEND, Ind. -- A South Bend Police officer is under investigation for a crime he says he didn't commit. For about a year, Officer Theo Roberts has been speaking about what he says are injustices within the South Bend Police Department. He says that's why he is being questioned about a crime.

"I was doing what's called civic duty and they turned that into a criminal offense," said South Bend Police Officer Theo Roberts.

Roberts says he's been cleaning up his neighborhood for years, but now he's under investigation for it.

He says the problem house is on Frederickson.

"See here's the issue here. Now this trash not only was it here, but it was also in the street out here. You see some of it is in the street now?" said Roberts.

Roberts says on July 4th most of the trash was in the street, so he put it back on the property it came from.

"In my off time, off duty, a lot of this trash was in the street I then picked it up and put it up here out of the street," said Roberts.

"The South Bend Police Department took the complaint and then they charged me with vandalism," said Roberts.

The South Bend Police Department confirmed the incident is being handled by internal affairs.

Roberts says he is convinced none of this would be happening if he hadn't spoken out against the department and the city.

According to the prosecutor's office, no formal charging documents have been filed yet.

The person who filed the complaint didn't want to go on camera but said he had no idea his complaint would lead to an internal investigation.

The resident says the trash that was in his yard was just there until trash day.

Neighbors said the trash has been there for weeks.