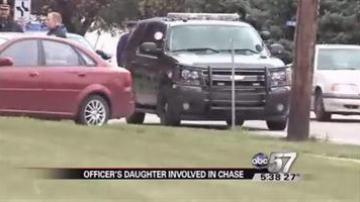 Her father as well as other officers tried to get her to stop after she had driven away from a doctor's appointment.

The officers attempted to pull her over with lights and sirens, but eventually blocked her off and ended the chase after she made a U-turn.

She was taken to the hospital for a psych evaluation.