Officers stepping up patrols along county roads for farming season 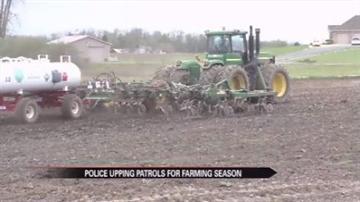 BREMEN, Ind. -- It's the busiest time of year for farmers, but planting crops means more tractors on the road.

That's why the Marshall County Sheriff's Department say its stepping up patrols all across its county roads. It's all in an effort to keep farmers and drivers safe.

Deputies say if a driver crashes into a large tractor it can be deadly. They are heavy and they don't move, which is why local law enforcement agencies want drivers to be mindful when sharing the road with them.

This time of year, local farmers like Charlie Houin are going non-stop planting their yearly crop.

That means drivers are having to share the road with large tractors. The equipment farmers use move slowly and that can make drivers impatient.

"If a tractor is going 20 mph and you’re going 50 mph that tractor may look like it’s a long way away now, but in a matter of seconds you are right up on," says Marshall County Sheriff's deputy Matt Brown.

So, starting now, the Marshall County Sheriff's Department is going to be increasing its patrols of county roads.

"We’re definitely watching and they will be cited if they break the law," says Brown.

Farmers like Houin say they are always conscious of drivers and will get off the road, to let drivers pass, as quickly and safely as they can. However, he says it is not easy.

"They are big and heavy like you said, but they are also very difficult to maneuver because of their size," says Houin.

That is why local farmers, as well as deputies, want drivers to slow down and give themselves extra time to get where they are going.

"We are a tight-nit community," says Houin. "We don’t want to hurt anybody and we don’t want that on our conscience."

Deputies say they are going to be cracking down on speeding, as well as drivers who pass a tractor illegally. They best advice from officers: Slow down and take your time.