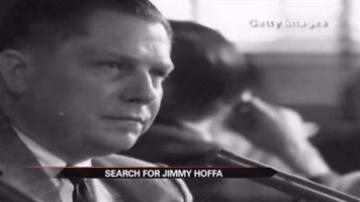 ROSEVILLE, Mich. -- Samples from a Michigan driveway are heading to a lab to determine if that driveway is where Jimmy Hoffa was buried.

Police said they got a tip from a dying man that the body was buried under the driveway. The tipster said he did not actually see Hoffa there but had reason to believe the body is the teamster's boss.

"He believe it's Mr. Hoffa because he states that his body was allegedly interred, that it was the day of or day after Mr. Hoffa disappeared," said Chief James Berlin. "The home, at the time, was allegedly involved in some type of booking operation which may have ties in Detroit to organized crime."

However, police did not find any traces of human remains in the area. And they also believe that the mystery is solved.

"I don't think it's Mr. Hoffa. It'd be great if it was, because I'd love to bring closure to his family and the hundreds of thousands of teamsters who idolize this man and just to Southeastern Michigan," said Berlin.

Test results on those samples are expected to come back next week. Police said if the results are positive, officers will start tearing up the property.