Official: Damage worse than thought in some counties 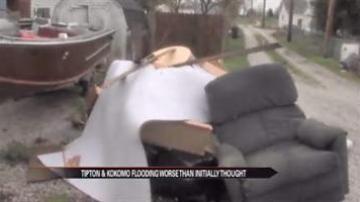 INDIANA — Rivers are still running high in parts of Indiana and throughout the Midwest, keeping many states under flood warnings Thursday morning.

From Tipton to Kokomo, the damage is worse than first thought.

Emergency management officials are still trying to determine the extent of damage caused by up to five inches of rain in just a matter of hours last week.

"We have 60 homes with those families displaced, so the numbers are still rolling in and I hope to have to those today as far as the categories of damage," said Chuck Bell.

An estimated 150 people were displaced from their homes after the Big Cicero Creek spilled over its banks, flooding the the south side of Tipton.

It could be weeks before some people can get back into their homes.