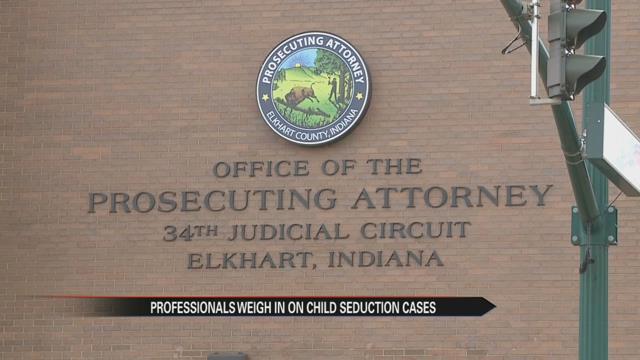 An update to a story ABC57 first broke for you back in August. Keidrick Stout is still sitting in jail after being arrested for attempting child seduction back in August.

According to our reporting partners at the Elkhart Truth, on Thursday morning, a judge refused to reduce Stout’s $20,000 bond because of previous misdemeanors and failure to pay child support.

In August ABC57 showed you the explicit messages between Stout and a 16-year-old minor. Both parties seemed to want to have the conversation but can one really argue that it’s considered consensual?

“A lot of times the children are saying I am of age to give consent and I didn’t see anything wrong with it one of the key pieces is that they are not the adult in the situations,” says Barbara Vernon, Vice President of Programs with Child and Parent Services in Elkhart.

Vernon has been interviewing children involved in abuse cases for 16 years. She has seen a wide variety of sexual abuse including child seduction.

“In a child seduction cases it is a care taker who has been involved with a child in some type of sexual way and it is the adult's responsibility to not enter into that situation,” says Vernon.

In situations like Stout’s when messages are sent from a 33-year-old man to a 16-year-old child where both the minor and the adult are behaving inappropriately what’s the protocol?

“The adults who are in those positions of authority over children need to have an awareness that the kids may act or present themselves as adults and they are not. In their brain development and their cognitive functioning they are not adults at all even though they may physically look it,” says Vernon.

Vernon says the decision to engage in sexual behavior is a mental development that people do not fully develop until they are 25-years-old.

“Child seduction is a different animal it contemplates that area where a child could legally give consent,” says Curtis Hill, Elkhart County Prosecuting Attorney.

Hill broke down child seduction laws that protect children who may think of themselves as adults from those who may be in a position of power.

“We are talking about adults who know better who have the ability to influence and inspire children. That’s what we are hoping and when that is taken out of context and children are looking up to people who are taking advantage of then that’s a problem,” says Hill.

Regardless of whether the 16 or 17-year-old initiates an inappropriate relationship or not the responsibility ultimately falls on the real adult.

“It’s frustrating that the people that we put in those positions of authority and care taking of our children have that poor of boundaries,” says Vernon.