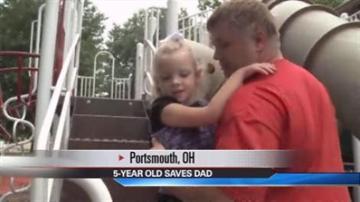 PORTSMOUTH, Ohio -- An Ohio man says if it was not for his five-year-old daughter he would not be alive.

Anthony Evans got sick last week, blacked out, and collapsed in the bathroom.

His three youngest children were with him at home. His five-year-old Kaeyln saw him on the floor and called her big sister with a cell phone.

"It's just amazing that someone her age could do what she did. Kept totally calm. No rush. She just, she knew what to do," said the father Anthony Evans.

Minutes later medics showed up and rushed Anthony to the hospital.

Doctors say if he had gotten to there any later, he likely would have bled to death from a stroke.