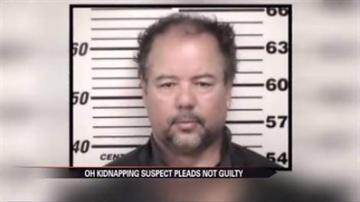 CLEVELAND, Ohio -- The man accused of kidnapping and holding three women in his basement for a decade has pleaded not guilty.

Ariel Castro is facing more than 300 charges including kidnapping and rape. He even fathered a child with one of the victims.

The 52-year-old said nothing in court Wednesday. He kept his head down the entire time.

Castro's attorney entered the not guilty plea for him after waiving the reading of his rights in hopes of avoiding the death penalty.

"I would absolutely expect the death penalty to be sought in this case.  In Ohio the law is very clear, on aggravated murder, if you premeditate and then commit the termination of someone else pregnancy unlawfully, you are subject to aggravated murder," said ABC News Legal Analyst Dan Abrams.

Castro is being held on $8-million bail.

Prosecutors say they intend to charge him with every crime they can prove he committed.