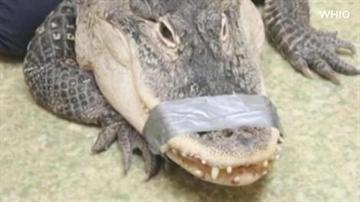 An Ohio man could face animal cruelty charges for keeping a 7-foot alligator in his basement.

The Humane Society pulled the animal out of the man's home Sunday after getting a tip about mistreatment.

Officials say the alligator was not being kept in proper conditions and was not on a proper diet.

Officials say the alligator had broken teeth, a messed up snout and was never exposed to natural sunlight.

The alligator is believed to be 15 years old and weighed 130 pounds - much less than it should.

Friends of the owner, who appeared in a video taunting the alligator, could also face charges.