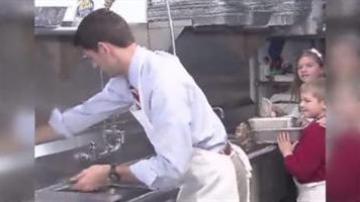 YOUNGSTOWN, Ohio. -- Vice presidential candidate Paul Ryan may be in some hot water.

Following a weekend visit to an Ohio soup kitchen, Ryan was videotaped washing dishes in the dining hall, but some workers there said the visit was staged.

“I do want to clear the air that he did come in after the kitchen was closed and he did washed two or three pans that were dirty,” said Brian Antal. “From what I was told, he was told that the serving would be done and in so many words asked to save some pans and they came in, washed a couple of pans, and left."

Since the claims were made, the soup kitchen has received many calls from people saying they no longer plan on supporting the mission.