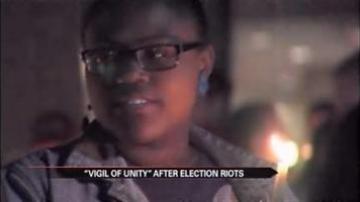 OXFORD, Mich. – Just one night after riots broke out on the campus of Ole’ Mississippi, they came together in a vigil of unity.

After President Obama was re-elected to another term, hundreds of students ran through the streets protesting. Some students reportedly shouted racial slurs.

Now students want to show that is not who they are.

“I think it’s really especially after what happened last night to show that it doesn’t define our community,” said student Michael Shea. “It was an isolated incident.”

During the riots two people were arrested Wednesday for disorderly conduct. No one was hurt in the protest.