Olympic hopefuls ready to smash their way to London 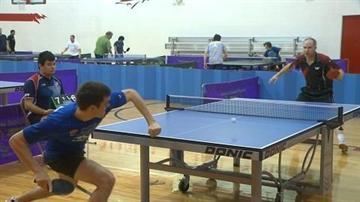 SOUTH BEND, Ind. – For 16 years it has been a dream of Joey Cochran to become an Olympic ping pong player; it is the same dream his coach, Dan Seemiller, shares. Now the two men have a chance to see both of their dreams come true.

The two men couldn’t be any more different.

A five time U.S. Singles Champion, Seemiller has coached the Olympic team at the 2000 and 2004 summer games. “Walking out in the opening ceremony in Sidney before a 118,000 people, it brings tears to your eyes; it’s just overwhelming really, but something I’ll never forget,” said Seemiller.

Seemiller resigned his coaching position after the Athen’s games and now wants to be an Olympic athlete competing for the glory.

And he is hoping to bring a few friends along for the ride.

Joey Cochran has been coached by Seemiller since he was 7 years old, he is 22 now.

The 6 foot 2 inch youth likes to keep his serves tight, or difficult for his opponent to attack.

Cochran is a student of the game and his opponents, spending hours both at the table practicing and at his computer watching videos of the best in the world; especially those he is likely to play against.

Where Seemiller is weak is where Cochran is strong; quick reflexes and agility are necessary to be successful at table tennis.

But Cochran has had trouble focusing in the past, something he has worked hard to get passed. “This has been my dream since I was six so playing in this is my best opportunity yet; I’m stoked, I’m ready,” said Cochran.

But there is one thing Cochran doesn’t have that Seemiller has in spades; experience.

While physical quickness and agility are vital, the same can be said about the mental aspect of the game.

Seemiller has spent years playing against and watching the best in the world.

His ability to read an opponent’s body language, and recognize the spin they put on the ball, are advantages other competitors half his age just don’t have. “I’ve got a shot; it’s going to be pretty tough because it’s pretty grueling physically, so I’m hoping my body holds up,” said Seemiller.

Next week, Seemiller and Cochran will head to Raleigh, North Carolina for the last qualifier for the Olympic trials held there later that weekend.

They will compete against more than 30 others for the last two spots in the Olympic trials.

If they are successful in getting into the trials, they will be joined by friend and Mishawaka native Mark Hazinski.

Hazinski is currently ranked second for the Olympic trials, according to Seemiller.

Only four competitors move on from the Olympic trials to compete in the Continental trials for the chance to represent North America at the 2012 London Summer Games.

At continentals, four Americans face off against four Canadians to see who gets to go to London.

At the 2008 Bejing Games, China took all three medals in both Men’s and Women’s Singles competition.

The opportunity to compete against the Chinese is something Seemiller would love to have. “It would be the greatest challenge of my life; and could you imagine if you beat one of the Chinese at the Olympics? You’d be a superstar,” said Seemiller.

But to get to the Chinese he will first have to make the team.