On the River throws last beach bash after eight years 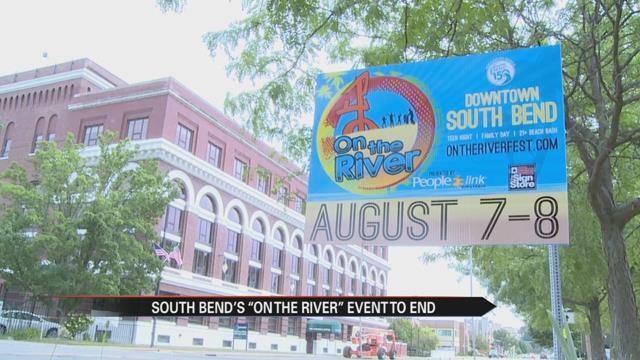 The annual On the River event along South Bend’s East Race offers fireworks, live music and a beach party, the event has brought in over 20,000 people to date. This year's event will be the last.

After eight years, the space where the event is usually held, is being developed into an apartment complex.

Construction of the Cascade Condos will begin later this summer.

“We always say that the mission of this event is transforming the landscape of our community. If only for one weekend a year, we’re able to transform this vacant part of land into a tropical paradise,” said Aaron Perri, Event Director of On the River.

But the beach party isn’t just sun, fun and games.

Profits from the event go to the Center for the Homeless.

“It’s a place where they really aim to transform the lives of the folks that live there. It’s an event that the community has really come to know and love. It’s a little bittersweet for us to say goodbye to the event,” said Perri.

A bittersweet end not only for the event’s volunteers, but also for the Center for the Homeless.

The event has raised over half a million dollars over the last eight years which has gone directly towards the mission’s funding.

“It’s bittersweet, but we’re going to get a chance to celebrate but at the same point we’re just sad that the site is no longer. They just got so many people behind, I can’t even imagine the hundreds and hundreds of people who have given so much for this event,” Steve Camilleri, Executive Director of the Center for the Homeless.

“They’ve been a really, really big help to me. Getting me on my feet and helping me find a job, the support system is like phenomenal,” said Robert “Beau” Kucharski Jr., who stays at the center.

“I really take a big advantage of this program here at the center because it’s very encouraging,” John Harper, who takes classes at the center.