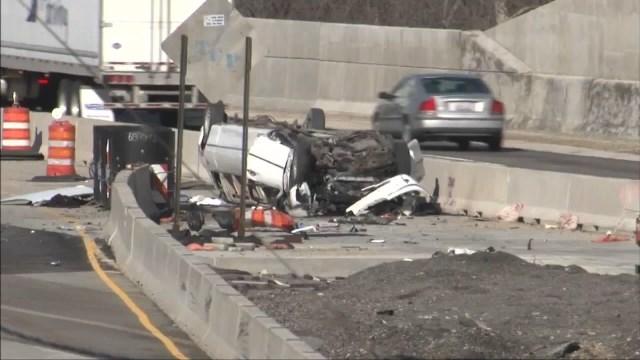 (WLS/ABC News) -- One person was killed and six people were injured in a rollover crash on eastbound I-90 near Route 25 where a limo flipped onto its roof.

The white Lincoln Town Car was carrying four male passengers and two female passengers, ranging in age from 45-64, from Wisconsin. They were on their way to O'Hare International Airport, heading to Mexico for vacation.

The 20-year-old driver told Illinois State Police he was blinded by the sun just before 7:15 a.m. Friday and couldn't see the traffic pattern in front of him. He crashed into a concrete divider, which caused the limo to flip over.

Emergency crews from Elgin, East Dundee, Hoffman Estates, West Dundee and Bartlett responded to the scene. Five people were able to escape the vehicle before first responders arrived. An off-duty Streamwood paramedic was also on the scene, treating the injured.

Crews freed the other two people from inside the limo. Six people were transported to Sherman Hospital in Elgin. One person was taken to St. Alexius Medical Center in Hoffman Estates and is expected to be OK.

The accident shut down several lanes of eastbound I-90 Friday morning, but traffic could still get through.