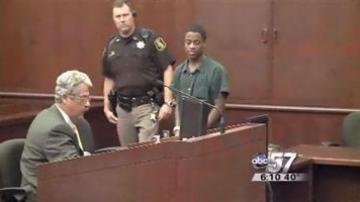 NILES, Ind. -- One of the five Niles teens accused of blackmailing a girl into sex will be sentenced Monday.

Leon Murphy was offered a plea deal in exchange for his testimony against his friends. He initially turned it down but changed his mind last month.

Two of the teens, Parnell Martin and Trey Nichols also plead guilty. Martise Washington was found guilty during his trial.