One of the world's biggest icebergs could soon split from Antarctica 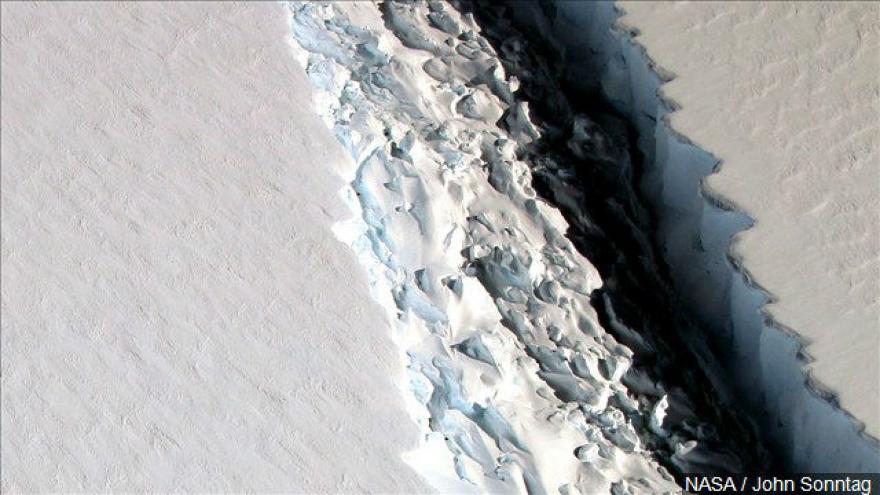 (CNN) -- A huge ice sheet more than half the size of Qatar could be about to break off from Antarctica.

If the Larsen C breaks free, it'll be one of the world's biggest ever icebergs, measuring 6,000 square kilometers or 2,300 square miles.

That's the size of four Londons or more than seven New York Citys.

Larsen C is a portion of the greater Larsen Ice Shelf on the northeastern coast of Antarctica.

The ice crack currently spans 200 kilometers, leaving just five kilometers of connection left, according to the European Space Agency. It's not clear how long it'll take for the sheet to break off from the shelf.

The ESA is monitoring the sheet through CryoSat, its mission dedicated to ice sheets in Antarctica and Greenland, along with a duo of ESA radars.

If it drifts away, there are fears Larsen C could pose a danger to ships.

"We are not sure what will happen," Anna Hogg, with the University of Leeds, told ESA. "It could, in fact, even calve in pieces or break up shortly after. Whole or in pieces, ocean currents could drag it north, even as far as the Falkland Islands. If so it could pose a hazard for ships in Drake Passage."

Larsen C is not the first major iceberg to break off.

In the last three decades, Larsen A and B have also cleaved from the shelf. That's a big deal, especially for a frozen mass in one of the quickest warming areas on Earth, according to NASA.

The split of Larsen C will fuel a vicious cycle leading to more vulnerability, NASA says. The deeper ice the Larsen C had once shielded is expected to become vulnerable to melting and disintegration, especially with rising temperatures.

As it loses part of its anchor, the ice shelf could become less stable.

There are no major research bases or centers on the piece that's about to break away, unlike on the berg that split from Antarctica in 2015, according to ESA.

ESA radars monitoring the region will tell researchers exactly when the split occurs. The agency's systems will also help also calculate changes in the volume of the Earth's ice after the monumental break.