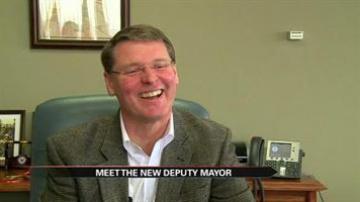 SOUTH BEND, Ind. -- South Bend's Deputy Mayor Mark Neal has been on the job just three days. The former city controller now has the most powerful job in the city. In a one-on-one with Neal, we learned he is a family man who is looking to make a difference while in office.

"I started on Friday when Mayor Pete first reported to duty and so far it's been great," said Neal.

The first item on his agenda Tuesday was to introduce himself to a group of University of Michigan students.

Instead of spending spring break at the beach, they're volunteering at the Unity Gardens.

The city of South Bend has made a great impression.

"I think we're all really excited. Energy has been really high. I think the cool thing is that a lot of us have never done a lot of this," said junior Alex Scharf.

Neal handed out "I love South Bend" t-shirts and quickly got to chatting with dozens of students who were eager to meet him.

He's getting used to the cameras and even answered some rapid fire questions with ease:

Do you eat sweets and what is your favorite?

Do you have a favorite TV show?

That's a good thing since the news loves to cover his every move.

Neal is excited to lead the city.

"I'm really enjoying all the things that are going on in the city and the city's focus on making sure we're creating opportunities to grow the city, to create jobs, to focus on public safety and to the address the issues with vacant and abandoned housing," said Neal.

Neal is going to be quite busy.

Over the next few months he will have to keep up with the "1,000 houses in 1,000 days" campaign, keep the peace with the city council -- that includes one member who is under investigation by Indiana State Police-- and deal with anything that arises with the tape scandal.