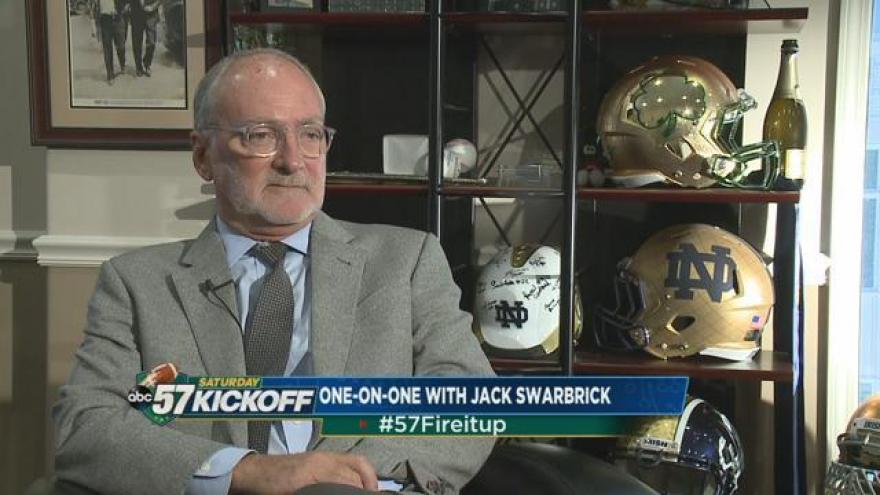 NOTRE DAME, Ind. - Without question Notre Dame Athletic Director Jack Swarbrick is one of the most influential people in the sports world, but it's what you don't know about his career that's most interesting.

"I never wanted to be an Athletic Director," Swarbrick said.

"I told my wife immediately after we had dinner together, Father John and I, and I said 'I still don't know if I want to be an Athletic Director but I want to work for him,'" Swarbrick said.

Which is coincidental because Father Jenkins wasn't sure he wanted Swarbrick either.

"Just as I wasn't sure if I was interested in the job, he wasn't particularly interested in me either. Several people had encouraged him to talk to me and I think he was checking it off his list," Swarbrick said.

The list was long. Swarbrick was one of about 30 candidates, but over dinner the list quickly narrowed.

"It has been one of the great benefits of the job ever since, the ability to work with Father John," Swarbrick said.

The way Swarbrick got on that list in the first place is where that Irish luck comes in.

What made him want to attend Notre Dame?

"Well, that may be my favorite Notre Dame story," Swarbrick said.

It was 1972 when Swarbrick first set foot on Notre Dame's campus but that almost didn't happen.

"I actually wrote Notre Dame declining the acceptance, which was a little unusual, but I wrote and said 'Thank you very much but I'm sorry I can't attend,'" Swarbrick said.

Swarbrick had to pay his own way through college and once he was accepted to Notre Dame, he quickly realized he could not afford it until he got some news that would change his life.

"I got a letter in the mail informing me that I had won a state of Indiana scholarship that could be used in any public or private institution in the state. That, overnight, made Notre Dame affordable for me and so I called Notre Dame. The person who answered the phone, I started this long explanation I had sent them a letter declining and whoever was on the other end of the phone, I don't remember now said, 'As a matter of fact, I'm reading your letter.' And I said, 'Could you tear that up? Because I do want to come,' and he of course did," Swarbrick said.

Swarbrick fell in love with Notre Dame. He lived in Howard Hall all four years.

He even joined the crew and lacrosse club teams.

His senior year, Swarbrick got a job on campus.

"Because if you really want to experience the culture of a place, get trained to work for it, right? In this case, get trained to be an RA.  It gives you a lot of insights as to what Notre Dame was about and how it perceived itself," Swarbrick said.

A career that would lead him into the world of sports.

His professional career started in the 80s serving a variety of leadership roles for the Olympics, Pan American Games, and World Gymnastic Championships before branching out and bringing the NCAA headquarters to Indianapolis in 2000, and a Super Bowl to the Circle City 12 years later.

It was that resume that earned him a seat at the dinner table with Father Jenkins.

"What we wound up talking about mostly that night was the future of media. About half of our dinner was focused on what I thought the implications of the Big Ten Network would be. I told him I thought it would result in the conference realignment, I thought it would result in the development of other conference networks and we talked about what all of that meant for Notre Dame," Swarbrick said.

That one conversation 9 years ago was the start of Swarbrick's impact on Notre Dame.

"I'm not usually as right as I was that evening, but much of what we discussed came to fruition," Swarbrick said.

With Swarbrick leading athletics, he guided one of the country's most powerful brands into new endeavors.

Notre Dame got a spot in the ACC conference, while maintaining football independence.

They also got some new swag.

A multi-million dollar contract with Under Armour.

That led to partnerships with Showtime, Bleacher Report, and even his own radio show.

"The entire venture into media for us, call it digital media, but it's all forms of media is the single thing I'm most proud of in my time here. We've done a lot of big things, but I think when you look back on this decade of Notre Dame Athletics, that transition, going from sort of last place in this area, I think being one of the leaders in college sports has been critical to positioning Notre Dame," said Swarbrick.

And to think all this from a guy who was skeptical about the job.

"I feel like I have the best job in the world," Swarbrick said.

And who almost didn't attend Notre Dame but for that scholarship.

"Why the story is so significant for me," Swarbrick said.

"Ted talked about how much he liked Herman and what a great relationship they had. He said, 'The thing I'm most proud of with my relationship with Herman is he and I figured out how to get the state of Indiana to set up a scholarship fund that kids could use at either private or public schools and we got that done.' So here I was sitting with the guy, Father Hesburgh, who had made it possible in a very tangible way for me to both go to Notre Dame and now sitting there in front of him again as an officer of the university," Swarbrick said.