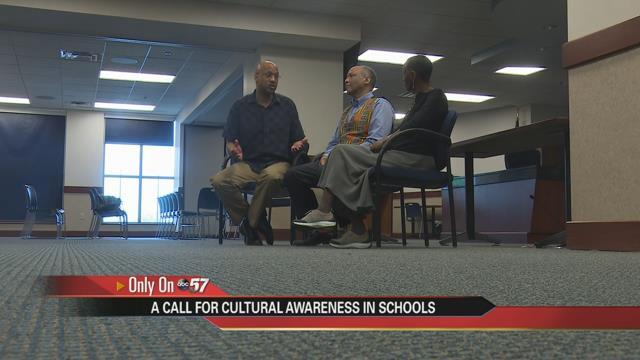 Many in the Michiana community are calling for cultural conversations to be had in South Bend Community Schools.

From outreach to curriculum, those folks questioned if there is more that can be done to address the needs of all students in Indiana’s fifth largest school district?

Cultural competency won’t come instantly, but it starts with conversations.

“a lot of concerns have been raised over time and promises and nothing came through from that,” said Dé Bryant, Director for the Social Action Project at IUSB.

When concerns are met seemingly with inaction, they grow into frustration.

So, public criticism was the next step for two local activists.

They frequent school board meetings, pressing the district to focus on issues affecting their community.

“The numbers look like African American students comprise roughly about 35 percent of the student body of the school corporation but they’re subject to 63 to 65 percent of all suspensions or expulsions and ultimately tracking to special education and other disciplinary practices,” said Heller.

African American students are in fact the largest ethnic group enrolled in the district.

They make up more than a third of the student body.

White students are at 32.6 percent, just above Hispanic students at 20.6 percent.

That’s a large community, these activists and others, felt had been under-served.

In 2013, the district agreed and installed an African American Student/Parent Services office.

But has anything changed in three years?

“It was such a struggle for it to actually be implemented and we would like to see it function the way it was envisioned as a way of being able to do that cultural competency and to acknowledge that there are disparities, first of all, and to provide some remedies, some solutions for that,” said Bryant.

Heller, Bryant and others believe complacency has held this corporation back for far too long.

But the man at the center of their concerns says he’s been fighting to bring a change to the district.

“All of us have to work together to make things happen,” said Dr. G. David Moss, Director of African American Student/Parent Services. “This is an issue that’s been around for a quite a while, it’s not just a single person that’s going to save or turn the ship, it’s going to take the entire community.”

“These individuals are on the front line in trying to create answers to some of the questions we have,” said Moss.

They work together to address questions about academic achievement.

“One of my main concerns is making sure African Americans are prepared for college,” said Randall.

And they explore questions about self-identity.

“We need clearly to understand the effort that was put into dehumanizing us and try to restore that to bring back our history,” said Stanley.

Dr. Moss is also challenged to show educators the disparities in the treatment of African American students.

“African American kids have a larger proportion of students that are expelled and suspended for things like defiance, or disobedience, whatever it might be, it’s really subjective in terms of the person looking at it saying ‘this is something I don’t want to deal with,’” said Moss.

The concern seems to be apparent to both sides.

The question is, is something being done soon enough?

“Addressing public schools issues is a fundamental issue not just for kids and their families, but for the community. If we’re not educating our children, we’re kind of cutting off our future,” said Heller.