Only on ABC57: Brandon Jackson's family speaks out 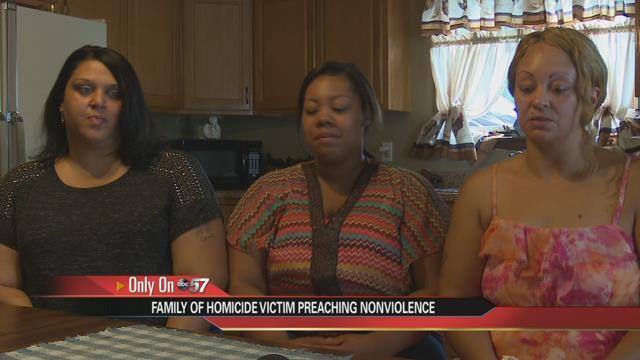 Less than two weeks after his murder in Elkhart, the family of Brandon Jackson is speaking out.

“He was the sweetest, sweetest guy,” Sonya Jackson, Brandon’s mother, said. “He was just so funny. He always, you know, joked. He just loved to crack jokes. I know a lot of people are gonna remember him by that.”

“I’m just using his memory to hold myself together and hold my son together,’ Rikki Taylor, the mother of Brandon’s 6-year-old son, said.

Brandon, 24, is being remembered by his family less than two weeks after he was shot and killed inside an Elkhart apartment on West Garfield Ave.

Police have arrested and charged 18-year-old Tyrell Beavers, of Illinois, with Brandon’s murder, but a motive is still not known and the Jackson family has no idea who Beavers is.

“I wish I could ask the guy that they have in custody, why?” Jackson said. “You know, what happened? Why would you take my son?”

“This is something that everybody’s gonna have to work through and I just want [Beavers] to know what impact he had on us,” Taylor said.

A lasting impact, as the Jackson’s struggle to cope with the loss of a man they say loved his faith, basketball and his son more than anything.

Taylor said her son is fully aware of what happened to his father.

“He just wanted to know who did it and why they did it,” she said.

A funeral and candlelight vigil has been held in Jackson’s honor and his family is hoping his legacy will live on.

“Brandon was a teacher,” Taylor said. “Brandon’s time was not in vein here because…he taught so many people. Anybody who knew Brandon, I’m positive he impacted their life in a way that they will never forget.”

The Jackson family said they plan on working to make Elkhart safer in Brandon’s honor.

Taylor said Brandon “loves his family more than he hates the people who did this to him,” so she asks that people frustrated over his death not retaliate.

The family’s pastor, Reverend McNeal Stewart, said the community should focus on reaching out to Elkhart’s youth and teaching them how to react appropriately.

“Before you do something out of a moment of anger or a rush to judgment because you think somebody has done something to you and you’ve gotta respond in this big way, take a moment to think, ‘is it worth it to change your life forever to respond in violence?’” McNeal said.

Beavers is set to make his first court appearance on July 7 at 8:30 a.m.