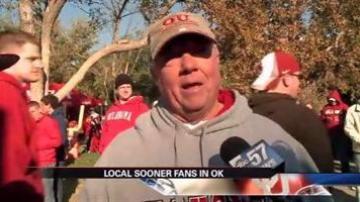 NORMAN, Okla. -- The Sooners welcomed Irish fans into Norman for the weekend match-up, but there's no question Notre Dame has left a rotten feeling behind in Oklahoma.

Many Sooners still feel that pain today and the Irish don't feel too bad about it.

We caught up with many Irish fans that made the trek from Michiana, and they were hoping for another successful night in Sooner Territory.

"Boomer Sooners. Enjoy your time now because soon the victory will be ours,” said Rick Tompos from South Bend.

Saturday wouldn't be the first heartbreak in Norman.

Bonner was a 10-year-old super fan during the game where the Irish beat the Sooners 7-0 to break the streak.

"We were just used to winning you didn't go there and expect to lose,” said Bonner of the game in 1957.

He found out quick what losing meant inside an OU stadium.

"Back then they let the kids go on the field and ask the players for a chin strap and they would give it to you. After that game they said they don't give them away when we lose,” said Bonner.

Now he gets to share this legendary clash of traditions with his grandson. He hasn't broken away from this family legacy of Sooner born and Sooner bred.

"They're going to win big,” said Cade Hendrix, his grandson.

But the Irish are hoping to maintain their undefeated glory this season.